Inheriting the Angles of an Electrified Heart

In 1996 my mother, Clarissa Rizal, completed her first woven ceremonial ensemble entitled, “Copper Woman”. The ensemble’s dancing blanket features a repetitive geometric Ravenstail pattern that she graphed and wove, filling the design field. She titled the blanket element, “Discovering the Angles of an Electrified Heart.” Each warp end of the long fringe that falls at the dancer’s calves is crimped with a small copper cone; even the slightest sway triggers the tinkling of the rain.

Born to two BIPOC, my mother was raised without a lot of inherited “privilege”. She walked to school, helped raise her siblings, diluted her jam preserves, contributed to the bills, made her own clothes, and entered the work force while still in high school. She began having children young, worked as a secretary, started a landscaping company, enrolled at the Institute of American Indian Arts in Santa Fe, and began, with her artist husband, the challenging lifestyle of ’starving artists’.

By the time “Exploring the Angles of an Electrified Heart” was complete and ready to be named, my mother was in the middle of a truly beautiful life. She had built and tended to several small businesses, had overcome health issues, carved out a flourishing marriage, maintained dozens of significant friendships, and owned a beautiful house and garden.  Her children were growing into self-driven creatives, and she had established herself as a full-time artist. My mother was a veteran of failed attempts and master of realized dreams. All of these things unearthed a sturdy foundation that allowed her to zealously traverse the infinite landscape of the unknown.

This design of heavy contrast, rhythm, texture, and overall unity mimics the balance, perseverance, discipline, agility, and innate power of an electrified woman.

I wove the “Discovering the Angles of an Electrified Heart” pattern into an apron twenty years after its first conception. This apron is one garment in a three-piece ensemble entitled, “Matriarch Rising”. It was woven to adorn the Indigenous-spirited woman with the appropriate regalia to support her dynamic position in this modern world.

With significantly less woven weight than a chief’s full-size dancing blanket, the ensemble allows its wearer to move with grace. The woven portion of the apron stops above the thigh to allow for unrestricted dancing. The collar accentuates the shoulders and collarbone, emphasizing the warrior’s physical strength. The woven band embellishes a wide-brim wool hat to protect its wearer from the natural elements of diverse climates. Each warp end of fringe is crimped with a small tin cone to conjure the tinkling, purifying rain.

This is ceremonial regalia for the globalized yet indigenous-spirited warrior woman — her heart with the ancestors and her mind on the future. 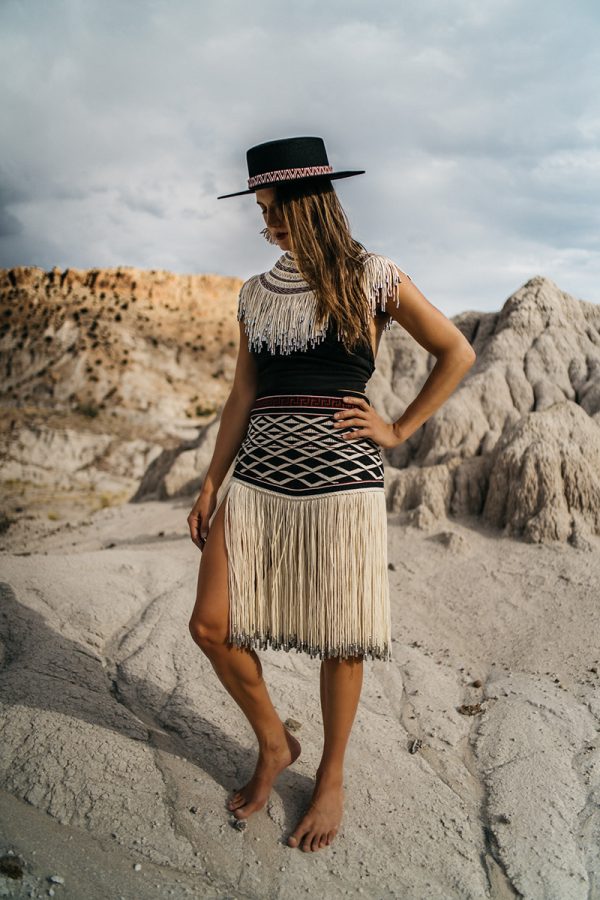 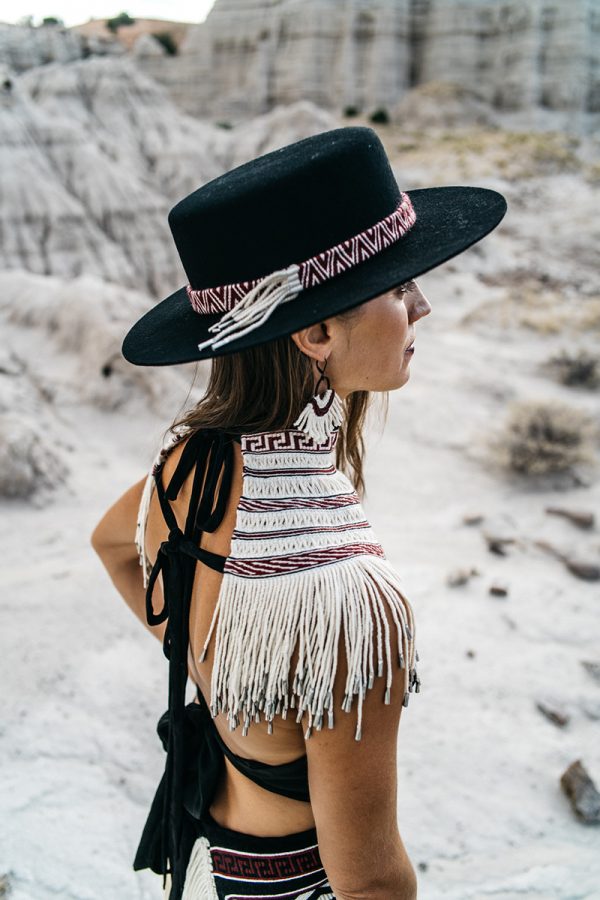 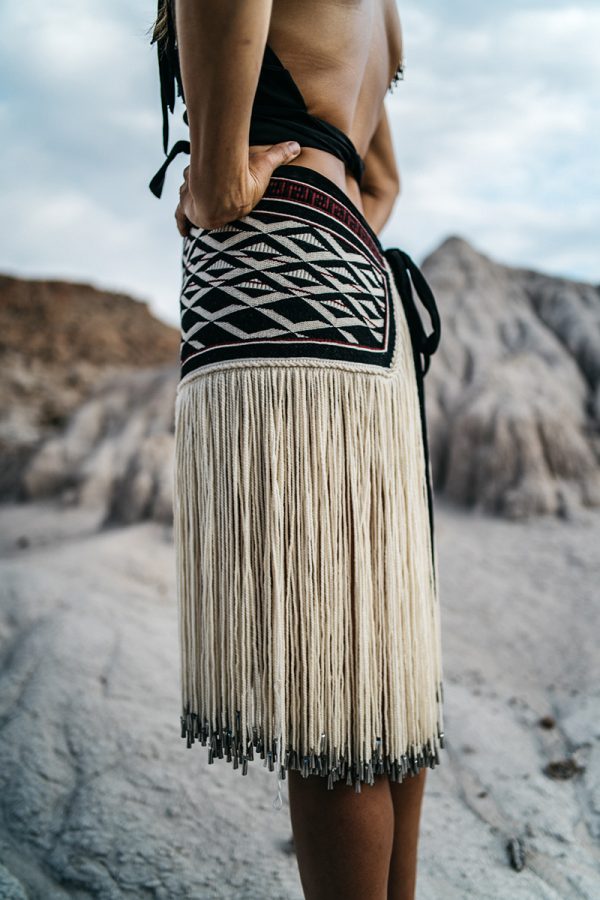 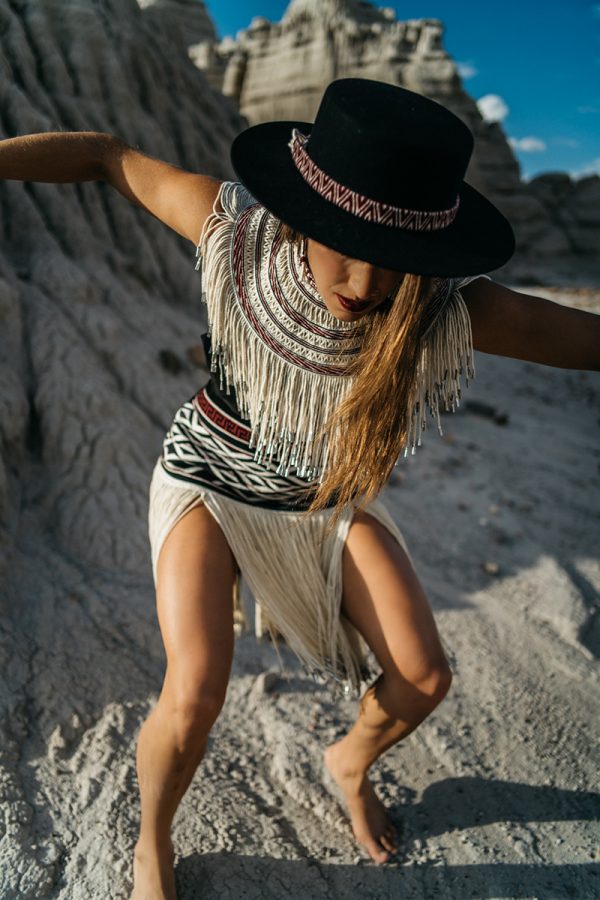 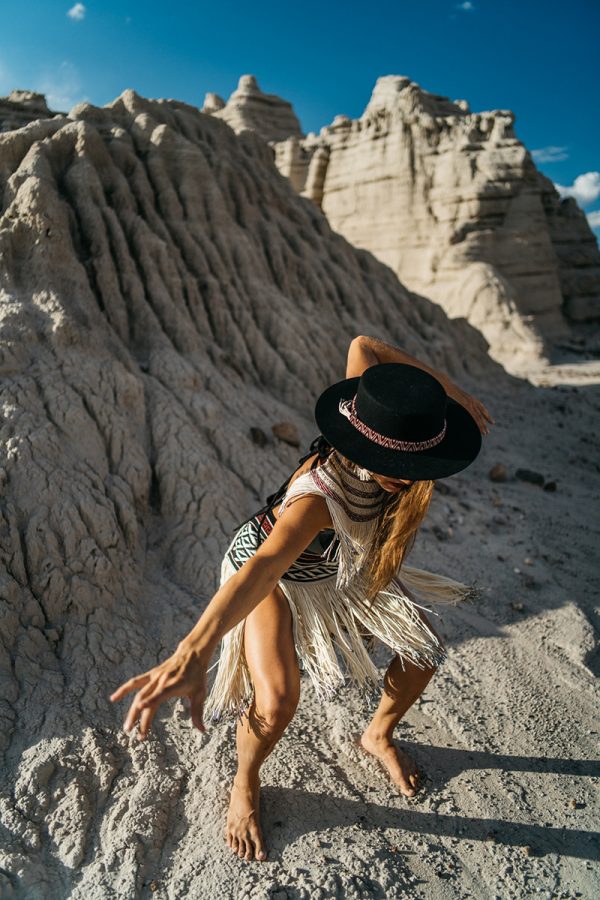